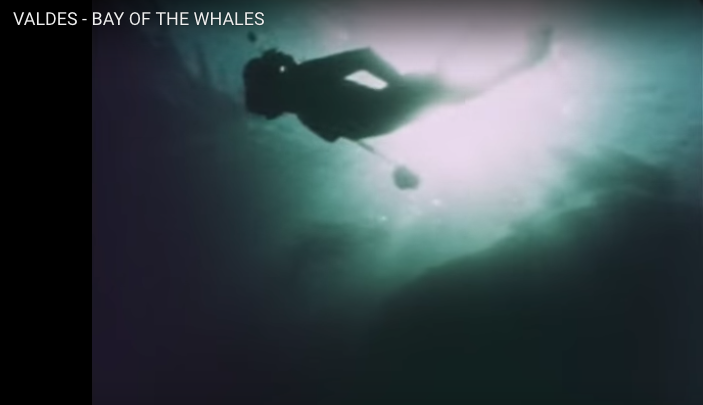 BBC “Explorers of the Deep”. A series of underwater adventure and discovery.
Valdes – Bay of the Whales
With Krov and Ann Menuhin
Narrator HUGH FALKUS
Unique close-up encounters with whales in their breeding grounds off the Argentine coast: meeting a 60-foot whale underwater face to face sounds like a frightening assignment, yet this is what KROV and ANN MENUHIN undertook to do for their first film.
It was part of an eight-month visit to the Valdes Peninsula to film a vast concentration of breeding sea-lions, elephant seals, whales, penguins and other seabirds. The Menuhins had many adventures but none more exciting than with the Southern Right Whales.
Their pictures of the great porpoise-like creature sliding, bucking, playing – and, in one breathtaking moment, knocking mermaid Ann across the screen with its tail -are unique. (SUNDAY TIMES) It was a unique record, made all the more absorbing because of the spirit of humility in which the humans made their contacts with the other species.
A MENUHIN-PRUNA production
Series editors ANTHONY ISAACS and CHRISTOPHER PARSONS
BBC Bristol
First broadcast on BBC 2 on 5th May 1974
Re-broadcast 29th December 1974 and 30th July 1979

0 comments on “VALDES – BAY OF THE WHALES”